Update (7.11.11 22:11): Updated the post with a link to the “ChiliProject – Spread the word” thread in the ChiliProject forums which holds most of the points I’ve dicussed at RailsCamp HH and the RUG::B.

I’ve been to two Ruby and Ruby on Rails focused events in the past week, first to the RailsCamp Hamburg 2011, then to the monthly meeting of the RUG::B (the Ruby User Group Berlin), and while I didn’t expect ChiliProject to be as well known as some other big or popular projects, I was somewhat astonished and maybe even a little disappointed to see how little even its name was known. It seems to me that public knowledge and being on people’s mind is something that we need to work on more than any technical or feature-wise improvements (don’t get me wrong: those are important too, but pretty useless if no one uses them…).

It really hit me last saturday at the RailsCamp when the schedule for the day was being discussed. When it was my turn to propose my talk (I had naturally prepared a short one about ChiliProject and why we had forked Redmine), I first asked how many people had heard of ChiliProject, then how many didn’t know Redmine. I estimate there were some 100-130 people present, and the answer to both questions was less than ten. Now I didn’t expect more than half the people present to know about ChiliProject, but less than 10% is a really small mindshare.

The interest wasn’t overwhelming either, but I credit that to my somewhat clumsy introduction to the matter and the very strong lineup otherwise than to sheer disinterest, so the talk turned into a discussion with people already using Redmine that have gone a little worried about the project and who were glad to hear about someone “picking up the slack”, even if it was in the form of a fork.

Then came the RUG::B. I had planned on going anyway and decided to try to spread the word about ChiliProject there. I reworked the presentation to be more focused on the technical and community reasons behind the fork (the slides aren’t available online as some slides might be misinterpreted without the presentation, the gist of the presentation’s arguments can be found in this “ChiliProject – Spread the word” thread in the ChiliProject forums) and presented it to the 30-odd people present. The preliminary question got roughly the same answer as on the RailsCamp, the interest and response were great though, including specific questions regarding the intended “community management” style and praise and admiration for having the guts to fork instead of just “giving up”.

All in all, I think those two visits showed me that we still have a lot of work to do in the mindshare area. The visibility of ChiliProject will rise when the new design (current design proposal here, not final yet) is released and deployed on some high-profile installations, but this probably won’t be enough. In addition to that, I plan on going to some european conferences during the next year (wroc_love.rb, Railsberry and the EuRuKo) and hold presentations or at least lightning talks about ChiliProject. Interesting times! :–)

tl;dr: Draper wraps the Rails “helper dumps” in objects resulting in namespaced dumps you have to remember calling. Yay (not).

Disclaimer: I’m no expert on OOP (apart from the basic class at the university that teaches that “putting code in classes” is good) nor Rails (I learnt ruby and Rails by myself roughly 2 years ago while tinkering with Redmine (hint: not the nicest code in the Rails world)), so don’t take my opinion for granted, I just hope to fuel the discussion a little.

Flashback to pre-Draper times: everyone has a feeling of sorts that the Rails helpers are probably a bad idea, but they still become the dumping place for any formatting methods and other stuff you don’t know where else to put. Formatting methods landed there because having them in your ActiveRecord models made the models look bloated which made you feel even worse than putting them in the helpers and/or because what you wanted the method do do wouldn’t work in the model because models miss the ActionView helpers (link_to et al.). Over time, the helpers would get bloated, you’d have to add them to an increasing number of views, maybe even include them in the controllers because you’d put some controller logic in there or needed view logic in the controller (I’m looking at you, #to_xml, but that’s a different matter). In the end, everyone would feel bad about the helpers becoming so big and jumbled together, but it still was better than having all this stuff in your models or controllers (or views!) and more convenient because you could even add all helpers to all view and be done with it (provided you didn’t have any methods with the same names in different helpers).

Enter Draper. It has a nice sounding name, claims to solve an itch Rails developers have, and uses a catchy sounding OOP pattern everyone has heard about some time or another as selling point. Problem solved, right? I thought so too at first (beware of the buzzwords!), but Andreas (@mediafinger) and Uygar’s (@uygar_gg) presentation at the RailsCamp Hamburg made me realize that the lurking unease I had about Draper is justified after all. Draper just wraps your helpers in objects (something you could have easily done before but rightfully didn’t) thus solving the cross-helper method name collision problem, at the cost of just a little less hassle than doing it yourself would have been while masking the pain you’d have had making decorators yourself.

Let’s have a look at an example, first without Draper:

Not really pretty because you have some function twitter_link_for_user that looks like it should rather belong to the User class (the for_user part of the method name should be enough of a hint) rather than lurch in the helper, and you have included the helper in the controller, for example to include the twitter link in some #to_xml call. If I’m not completely mistaken, Rails helpers are view helpers, including them in your controllers puts view logic in them, which kinda renders the whole MVC pattern moot and should be considered a code smell.

Now the same example with Draper:

You can now get the twitter link for the user by calling @user.twitter_link and you were able to stop including the helper in the controller, you can even drop the helper call in the controller if your helper becomes empty. You feel all fuzzy inside and are comfortable with your code again. The helper is empty and everything is neatly organized in objects, so it’s all OOP and must thus be good, right? I don’t think so.

Let me rephrase the above without using Draper (I’m aware Draper does a little bit more than that, but bear with me):

How does it look without the nice syntax Draper brings? There’s an explicit call to ActionView::Helpers in something directly called by the controller. It doesn’t feel so warm and fuzzy after all, does it? Here’s the slide from the aforementioned presentation which made me realize that you’re effectively squeezing view code between your model and controller: 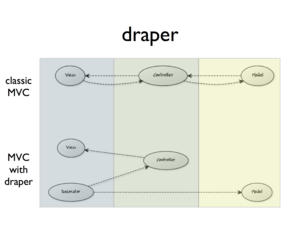 Now if you applied the decorator to your object only “after” the controller, I wouldn’t mind (provided said decorator contains view logic only). Sadly, that’s not the case in the code examples provided by Draper.

The approach presented above has more pitfalls still, and one that isn’t apparent from the code above is that you’re working on “fully” decorated objects in the controller. Apart from bringing view logic into your controller, this also is problematic with another feature of Draper which allows to white- or blacklist functions of the decorated object. Great feature, you decide to blacklist write operations to your object, including save, but that means for “write” actions (create and update) you can’t use the decorated object in your controller logic. No big deal, you just use the plain object and decorate only if the operation fails and you have to present the user with the form for the object (this would be the right way to apply view decorators, by the way). Now for whatever reason, for example for access control, you stick a method into your decorator (it’s only of interest to instances of that particular class but isn’t business logic, so you don’t put it in the helper nor in the object but into the decorator) and now need the decorated object before you call save on it. You now have to juggle a decorated and an undecorated instance of the object at the same time. Bummer.

Let’s recap what bothers us with the Rails helpers and what Draper can do for us. Does it avoid cross-helper method name collisions? Sure. Is it “more OOP”? You’re explicitly calling your helper methods on an object rather than including a misnamed hodgepodge of methods to be able to call them in views, so let’s say yes here too. Does it take this jumbled together mess out of the helpers? It does, and sticks this same mess but with better names into an object. I don’t consider a namespaced mess better than a non-namespaced one, so this is a draw. Does it keep view logic out of your controllers? Nope, I’d even say it makes things worse. Does it keep view logic out of your models? Yeah, but so do helpers. Does Draper give us more than a buzzword we can add to the list of “OOP things” our code does? I don’t think so, and you probably shouldn’t either.

How can the Rails helper situation be improved? I’m not sure I have a good answer to that, but if you think your helpers are too bloated, try splitting them into smaller topical modules. If you think your helper methods should really be methods on your business objects but don’t want to litter your model definitions with view logic or include the ActionView helpers in them (and you shouldn’t!), then by all means use decorators, but don’t use them as yet another dumping ground! Feel free to use more than one decorator on business object instances, for example a TwitterUser, a GooglePlusUser and a XingUser (yeah, decorators don’t need to be called SomeDecorator). Sure, this results in a call akin to TwitterUser.new(GooglePlusUser.new(XingUser.new(@user))), but at least it is very clear what each decorator does and it makes it easier to swap one for another or refactor any of them. Make also sure to know which decorator belongs to which MVC step, you can use decorated objects in your controller logic, but decorate your objects with view logic only at the end of or after your controller logic! Sure, that’s not as easy just dumping everything into the helpers or into Draper decorators (I know you can apply multiple Draper decorators on an object and thus avoid bloating them, the code examples and the fact that the decorated objects seem to get used in controller logic doesn’t indicate that this was the authors primary intentions. Furthermore, FooDecorator.find doesn’t make sense for a “proper”/reusable decorator), but no one ever said programming was easy :–)

Blogging didn’t really work for me in the past. I don’t know if it was because of the engine (wordpress), because I didn’t think I have enough interesting things to share, or that the idea-to-blog hurdle is higher than just ranting on twitter (I still do that, by the way…), but I tried twice in the past and it didn’t stick.

A last word of caution: this site still has some rough edges, no comments, no RSS feeds for categories, and so on. I decided to “relaunch” anyway as I have completed importing and converting posts from my previous (wordpress) blog more than 6 weeks ago and haven’t found the time to take care of the few itches I still want to scratch. 80% there is still better than not there at all :-) 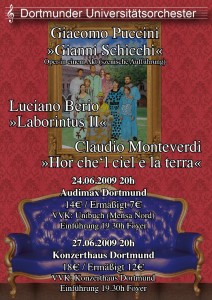